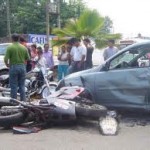 Off the main road, a man was killed in a hit and run incident in Fuengirola and another pedestrian died in Puerto Banús.

This has become one of the most tragic weeks in recent years as far as road deaths are concerned. On Monday night a pedestrian and a motorcyclist lost their lives on the A-7 near the Malaga congress centre while on Wednesday one man was killed in a multiple pile-up on the same road in La Cala de Mijas.

Monday night’s accident occurred when a motorcycle collided with a man who had apparently been trying to cross the city’s western bypass on foot. Both the pedestrian and the rider of the motorcycle died at the scene.
On Wednesday the accident took place at around 6 p.m. at kilometre 201 on the A-7 near the La Cala exit. Witnesses described how a lorry travelling on the Marbella-bound carriageway lost control on a bend. The vehicle then jackknifed and crashed into the central reservation, falling on top of a van travelling in the opposite direction and hitting two cars. The lorry driver went through the windscreen and died immediately. Two people were taken to the Costa del Sol hospital with minor injuries.
The road had to be totally closed at times while the lorry was being removed from the carriageway and traffic was diverted through La Cala in order to reduce tailbacks, which stretched to a maximum of three kilometres.
Taxi driver accused
In Fuengirola a taxi driver has been accused of causing the death of a Colombian citizen who was knocked down at the junction of Ramón y Cajal and Martínez Caleta on Thursday last week. The driver failed to stop at the scene but investigations led police to the tax.
A 78 year old man lost his life last Friday after being knocked down by a vehicle in Puerto Banús.
Tweet
Previous postMultipropiedad Colegio Abogados Malaga Next postAifos Piden Carcel